The other day, I saw the most incredible thing…. I watched as students were so entranced with what they were doing in their classroom, that they continued to create, to communicate and to share their stories well into their recess. They were having such “fun” learning that they didn’t want to stop. On more days that we care to admit, students are watching the clock waiting for the magic bell which will allow them to go outside and have “fun”. And yet on that day, in that classroom, recess was the last thing on their mind. The “fun” was happening in the classroom. Oh, to be able to “bottle” that! 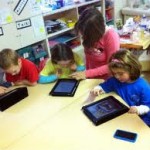 Critics would say that they were engaged because they all had hand-held technologies and yet, it wasn’t the device, it was the fact that they had choice of their activity, they were creating something that appealed to them and they were sharing their creations. As I walked in the students all wanted to share, but not just with me, they were sharing with each other and I loved the authentic feedback that they were giving each other. It was one of the those days when all of the theory was being put into practice and it was magical.

What magical learning opportunities are you offering your students?

When was the last time that your students would rather continue learning than go outside?