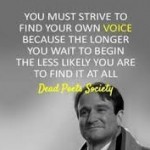 The idea for my first blog came from a candlelight service at church, one Christmas Eve.  I poured and poured over the words/graphics/ punctuality and finally hit the publish button ~ confident that no one, other than a few close friends would ever find it.   It was at least another month before I created my next post for my blog and I’m pretty positive that I only wrote something because a friend was in the background reminding me, challenging and supporting me to get something posted.  I can recall asking myself,   “Is this topic important to anyone? Does this make sense? Will anyone else care what I’m writing about? Why the heck did I start this blog?  Will this be another passing fade? Will it have an impact on my ability to lead a school community?”

Four years later, I have an Evernote file filled with ideas for blogs, it takes me twice as long as it should to read a professional resource as I fill the margins and the front and back blank pages with blog ideas and I capture picture quotes, on a daily basis, which spark an idea. My newest challenge isn’t coming up with ideas, it’s having the dedication to sit down at the computer and expand those ideas into a post. 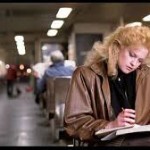 Just today I was reading a text on Instructional Coaches and one of the concepts reminded me of a scene from  Working Girl, where Melanie Griffiths needed to prove where her idea for a corporate merger came from.  In her innocence, she shared that it was a combination of an announcement in the Society pages and an article in a financial magazine.  In the margin I wrote “Where do our best ideas come from?”

The other day, I shared with a colleague that a tweet I had tweeted at an International Conference had been captured in print and was used within the article about the success of the conference.  He asked, “Was it an original idea?” Initially my bubble was burst!  The tweet was a combination of two ideas which, in my mind, needed to be connected into one thought.  To me, it had meaning!  So, in my mind ~ worth tweeting!   And really, that is all that counts, when you make the step towards making your thinking visible, by using the written word.  If it resonates with you, then put it out there. It allows others to see what is important to you.  Of course, they will judge you, some will agree, some will disagree. But in the end your own thinking will be pushed! 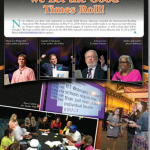 Embrace the Nike philosophy ~ Just Do It!

Where do some of your best ideas come from?