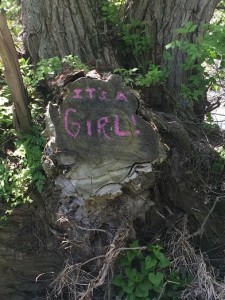 Recently I saw this painted on a tree and immediately started to wonder about the story behind the message.  Who wrote it and when?   What were the circumstances behind sharing something, that not that long ago would have been shared in the delivery room, so publically?  I could go off on a tangent about the loss of that wondrous moment when the gender of a baby was only announced at the moment of birth and not a few weeks after conception ~ but I’ll save that for another post entitled “What technology has stolen from us”.  Back to my wonderings about the message on the tree….Was there a significance to this location?  In my mind, I had envisioned a young woman coming to the park one night and writing the message on the tree and then the next day, bringing her husband to the spot, with his eyes covered, and then uncovering his eyes and revealing the exciting news about the gender of their unborn child. Or maybe this was the location where the husband proposed to his now pregnant wife.  Fast forward to the future when the current unborn girl is now a 25 year old woman and her parents select this very location for her wedding picture. Oh how I hope that the location remains untouched by “progress”. Hmmmm… another topic for another post on another day!!

Within time, I found myself generating several other scenarios.  Maybe this was a unique way of sharing the gender of a grandchild to the first time grandparents.  I recall our niece and her husband shared the gender of their unborn child with the whole family by having each of us select either a piece of paper with boy or girl on it  and then they opened up a large box and out floated several blue helium-filled balloons.   Several months later, Zaine Zavitz made his debut.

Three simple words scrawled in pink on the trunk of a tree and a potential story, complete with characters and plot is created.  I’ll never know if my conjectures were correct or not, but in the end, that doesn’t really matter. I was intrigued enough by what I saw to create a story. 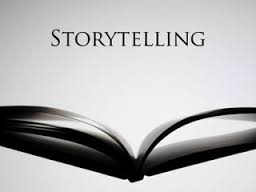 The power of creating their own stories is a skill that our students to practice, just as much as they need to practice reading stories that established authors have created for them.

What might you share as a provocation that would fascinate your students to the point that they would want to generate their own story?