As my little grey car made its way up the winding curves of “Snake Hill” on my way to today’s Google Summit, for just a split second I was transported back in time (about 30+ years) to when I was driving, yet another little grey car (a ’73 Ford Cortina) up the same hill on my way to high school ~ wishing each time that the clutch didn’t slip and that I wasn’t going to be responsible for a long line up of vehicles behind me.  As a former Saunders Sabre, this weekend I was a useful traveling companion as I knew the fastest route to the cafeteria, the numbering system for the classrooms and which seats in the auditorium gave you the best view.

During my time at Saunders, I had spent many a night, on the same stage that over the weekend welcomed several Google Educators, playing in the band and the orchestra.  My spare periods and lunch hours were devoted to practicing over and over again until I could finger my way through a piece of music without looking at it and my breathing was rhythmically in time with the pace of the composition. So it was great to spend a few minutes with Mark Carbone, the Chief Information Officer with the Waterloo Board, another former Saunders music grad, and reminisce!

Once my nostalgia for my musical days dissipated (and I stopped wondering why I hadn’t continued playing), I started to reflect on what technology I had access to as a secondary student in the late ‘70s and early ‘80s.  I recall thinking that teachers who used the overhead, instead of just writing on the board, were making an effort to somehow engage us as learners.  English, Math, History, Geography ~ all used novels and textbooks as the main source of information.  Every once in a while, the old reel to reel would be pulled out and we’d see a movie. I recall our Sociology teacher had us take care of an “egg” as a project to highlight the challenges of parenting.  I used to love the Chemistry classes when we’d pull out the microscopes, Bunsen burners and various objects to explore ~ mind you, as I recall, the exploration was controlled step by step.  In remembering some of my classmates that control is probably the reason that Saunders is still standing.

I guess you could say that the sewing machine and various kitchen items used in Family Studies would be considered technology ~ after all a Singer sewing machine does amplify the speed in which you can shorten a skirt. 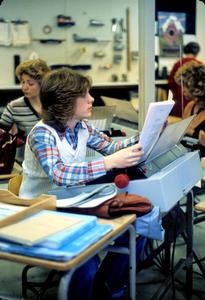 It was in typing class with Mr. Costello where we thought that we were actually using “technology”. And yet again, it was very controlled.  We started the year with “aaa sss ddd fff” and by the end of the year if we were able to type “The quick brown fox jumps over the lazy dog” we had reached mastery.  I guess that is as creative as one can get with a typewriter.

So in knowing the limitations of access to technology, what did teacher professional learning look like in the early 80s?  What inspiration were our teachers given to push us to greater heights, to ensure that we followed our dreams and to bring out our inner super hero?

I wonder if 30 years from now, some educator will be reminiscing about the days gone by when Google Apps For Educators, Sphero, Google Cardboard and Plickers were the latest and greatest and that teachers used to come together for two full days at a thing called #gafesummit #maplesyrupedu

If they do, I hope that they remember it with fondness ~ as these past two days have been an incredible reminder about what being a truly dedicated educator is all about.  And without bursting anyone’s bubble, it’s not about how to connect the latest and greatest technologically advanced tool to your computer, it’s about connecting with the learner that comes through your classroom door every day! 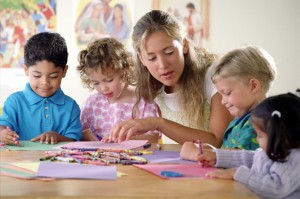 One thought on “It really is all about Connections!”