Once again, on the recommendation of one of my colleagues, I’m becoming consumed by a fantasy infused historical fiction book entitled Echo and written by Pam Munoz Ryan.  As one of the first main characters is provided with the opportunity to work at the factory with his father, images of corrupt factory owners immediately creates a connection to the miners in Ken Follet’s Fall of Giants. In that story, the rise of the union and their role in ensuring the safety of the workers is brilliantly described.  Factory owners cut corners, refused to upgrade safety equipment and put the lives of their workers in harm’s way in order to generate more revenue.

Fast forward to today and my own connection to unions and their role in the work that we do in education.  In researching the history of teacher unions in Ontario, I found it very interesting that for the majority of their time in existence, unions were mainly concerned with salaries and equity in terms of salaries.  It has only be recently that their scope of influence seems to have extended well beyond salaries and working conditions.   Not unlike the work of the unions back in the days of Follet’s early 1900’s, the health and safety of today’s educators is commendable work on the part of their union.  And every employee group needs to be represented fairly when discussions of wages and benefits are occurring.

But what I struggle with is the role that today’s teachers’ union seems to be playing in decisions about instructional practices, assessment expectations, participation in professional learning opportunities, interview structures ~ to name but a few; none of which will physically harm an educator. I’m not sure that I see the direction connection between the union’s role in monitoring working conditions (safe environments) and the work that we as educators should be doing in terms of supporting student achievement.  And yet, it seems that at most turns, whenever a new initiative is shared with the system, there is an understanding that we will connect with the unions in order to offset the chance that they will craft a memo and encourage teachers to not take part.  And the sad thing is that some teachers seem to forget who their employer is and actually consider following the direction of their union over the direction of their employer.

It has been said that the teachers’ union main goal is to reduce the work load of educators.  I certainly hope that that is not the case.  I would like to believe that all of us entered the field of education to have a positive impact on student learning and in order to have a lasting, meaningful impact that means that we’re going to have to roll up our sleeves and work hard.  Our kids deserve educators who are willing to work hard,  educators who are willing to go above what is expected ~ because it is in that “above what is expected” stratosphere where miracles happen and students who were once disengaged realize that if their teachers are willing to work harder, then maybe they should work harder too. 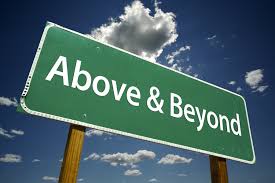 Whenever we are provided with an opportunity to engage in a conversation with our union representatives, I’m always waiting for the right moment to say “Would you want your son/daughter’s teacher to take the easy way out, to avoid professional learning, to complete the bare minimum when it comes to reporting achievement”?

I wonder if such a question will cause a pause in the discussion.