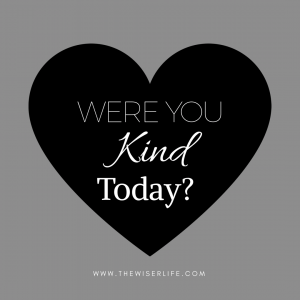 If someone were recording all of my conversations today, I would venture to guess that the most frequently used word that crossed my lips was, “Kindness”. It was one of those days when many of our Currie Coyotes needed reminders to simply, “Be Kind” and on several occasions, I started a conversation with, “Were you kind? I find that by using that question as an opening line, we avoid much of the “he said, she said” blame and criticism and we can get to the heart of the dispute more effectively.

From four grade 8 boys who were jostling each other in the hallway and comparing a classmate to a character on YouTube to a grade 2 student who was rude to a teacher ~ all of our interactions included the same, simple question, “Were you kind?”.

Even with a more significant situation, involving grade 6 girls and an online chat group ~ the simple question, “Were you kind?” immediately quelled the anger and the blame and turned the conversation to a more apologetic stance. Oh, how I wish the girls were thinking about kindness before they wrote such hurtful things to each other.  We had a rich conversation about how hiding behind their technology they were so unkind and that they would never say such things to each other in person.  I challenged them to be brave enough to have face-to-face conversations in the hopes that less hurtful things will be shared.

Children intuitively know what kindness looks like, sounds like and feels like. They are quick to blame others for being unkind, but at times, they are less likely to reflect on whether or not their own actions were kind.

Our job, as the adults who love and support them, becomes one of constant noticing and naming ~ and not only when we see/hear unkind behavior but also when we see/hear kind behavior.  I cannot help but wonder if we flood our school community with kindness compliments will it have an impact on our students’ ability to stop and think, “Am I being kind?”

How does your school community promote Kindness?